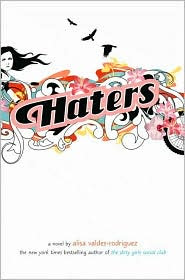 Taken from the back of the book:

"From the first day at her new Southern California high school, Pasquala Rumalda Quintana de Archuleta ("Paski") learns that popular students may be diverse in ethnicity but are alike in their cruelty. While Paski tries to concentrate on mountain biking and not thinking too much about ultra-hot Chris Cabrera, she is troubled by the beautiful and wicked Jessic Nguyen. Jessica is the queen of the haters and she's got her eye on Paski."

That was what you call a terrible summary. I can see why it was written, though. Trying to pull in readers of the Gossip Girl and A-List series, looking for a light read. Of course, Summary Writer Person completely forgot to mention that Paski is perfect at everything she does and has some bizarre psychic abilities.

After moving from the seemingly detached from modern society New Mexican town of Taos, Paski's crazy cartoonist father hits the road for sunny SoCal, where Paski is enrolled in a snooty girl-filled public school. Her "visions," help guide her, as does a spooky amulet given by her grandmother, and often lead her into trouble.

Haters is like a misunderstood, troubled middle schooler. The kind who hears over and over again that it "has so much potential," if only it "applied" itself more. A couple flaws added to Paski's character would be nice. Also, I wouldn't mind a little more about the "visions," stuff or someone who didn't immediately accept this and say "Oh, wow, cool!" or something of that effect. One more thing: sometimes problems take longer than a random out-of-the-blue phone call of which this is the general topic:

"Oh, gosh, Paski. I have been so mean, haven't I? I'm sorry. Just now I realized how horrible I was treating you and it's only because I'm so jealous because you're beautiful, smart, talented and so kind! Please forgive me and then meet me at the mall to shop?"

It doesn't tread any new territory, but rather resorts to stereotypes and predictable plot turns. However, Paski's often-judgement but occasionally raw and real voice is worth a read if you're really bored.
Posted by Gabbi at 7:41 AM

okay people you guys make the book sound sooooooooooooooo LAME! i people really need to know is that it is alot like the drama and clicks that probably haapen at your school BUT drama like that with millionare high school kids:D SO YOU SHOULD TOTALLY REad it because i know everyone will love it!!!!!!!!!!!!!!

Gabbi
She's a teenage girl with a passion for reading, procrastinating, and watching TV. She's neurotic and obsessive compulsive. She would rather watch How I Met Your Mother than Hannah Montana and would rather listen to Kings of Leon than Jonas Brothers. The people she lists as "Heroes," on her outdated MySpace are fictional characters and the "People [She] Would Like to Meet" are authors. She gets her worst marks in English. Reading is her life, is it yours too?